It has been really long time since I posted my last blog and even though I do intend to blog more often, i couldn’t do it as much as I would like. Anyways I will try my best to blog as often as I can.

In this post, I would like to mention small tips or changes which I observed when installing Denali (for those not familiar, Denali is the codename for SQL11) on my servers.

If you are installing Denali CTP3 on Windows Vista SP2 or Windows Server 2008 SP2, we need to manually install a couple of Standalone packages which are not already available with Denali setup files.

So before we launch the setup.exe ensure the following patches are installed on the  Windows server 2008 or Windows vista box.

The supported OS for Denali is

However the reason I am writing this post and to justify the above title for the post is the following screen when you launch the setup.exe 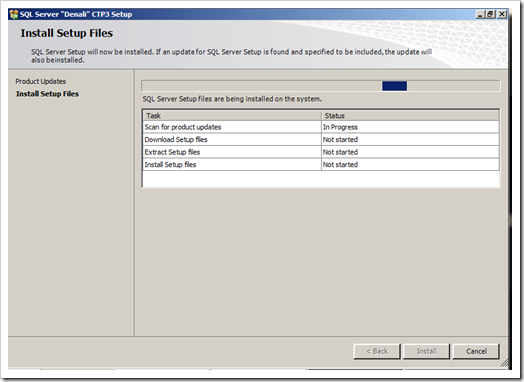 While we all of you know that when we launch the setup.exe from the sql server install media, the first step is to install setup support file which gets installed in the location
C:Program FilesMicrosoft SQL Server100(or 90)Setup BootstrapRelease following which  setup.exe is launched from the above mentioned location.

Another alternate approach is to use slipstreams to install sql 2008 where you will replace the setup.exe from that in the service pack. In Slipstream installation, the sql server itself will be installed with service pack and hence you don’t have to run service pack installation couple of time.

However this is possible only if your server where you are installing Denali is connected to internet, if you are not connected to internet you have to follow the same procedure as mentioned above as in SQL 2008 which is to patch setup support file manually by downloading the patch or use slipstream.

If you want to skip and avoid the discovery of patches, you can use the new switch /UpdateEnabled=False introduced in command line setup.exe

A small tip but sometimes can save some time and hence I thought I should post this.