Recently, we had the above question raised from one of our customers and I answered his question with the following answer which I think should be a good candidate for a blog post since many customers might have the same question as well

SCCM 2007 database  doesn’t supports Unicode characters yet. Hence in ConfigMgr,  Language support is solely dependent on the system locale of the clients which updates the database.

So in order to  view data collected from or directed to clients that are using a specific language, you must run the appropriate language version of the Configuration
Manager console on a computer set to the corresponding locale. For each client language other than Japanese, Korean, Simplified Chinese, or Traditional Chinese, inventory data is viewed from a Configuration Manager console by changing the locale setting on a computer running a U.S. English operating system.

Do I need to perform any setting at the SQL Instance to view foreign language data other than English?

There is no setting which needs to be performed from the SQL end to view the data.

For viewing only the SCCM Reports, change the IE browser’s Encoding settings to that locale and the reports can be viewed.

Following Reference should help clarify this. 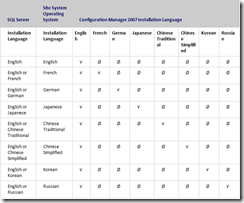